I don't know why, but when it comes to nail polishes Revlon usually doesn't seem to have a lot that catches my eye - with the exception of Moon Candy, but as soon as I saw the news that they were going to launch a scented range I was literally counting the days to the release date and even signed up to get first dibs on them in Boots. Finally the release day arrived and I quickly bought a few bottles of Revlon's Perfumerie Scented Nail Enamel (£6.49) but with 20 shades to choose between ranging from soft pastels, vibrant shades and darker sophisticated colors it certainly wasn't easy to choose. I have to confess that it's the first time that I've not only let my eyes guide me when I decide on a nail polish shade, but also my nose and after much testing and so much sniffing that I was almost light headed, I decided on Autumn Spice, Wintermint and Fresh Linen. Most of the time a nail polish bottle is just a nail polish bottle, some are more fancy than others but ultimately there's not too much you can say about it, but with the Revlon Perfumerie range I really like how they've made them just a little bit different by having a rounded top, which reminds me of apothecary bottles or old fashioned perfume bottles, it's a very nice attention to detail. 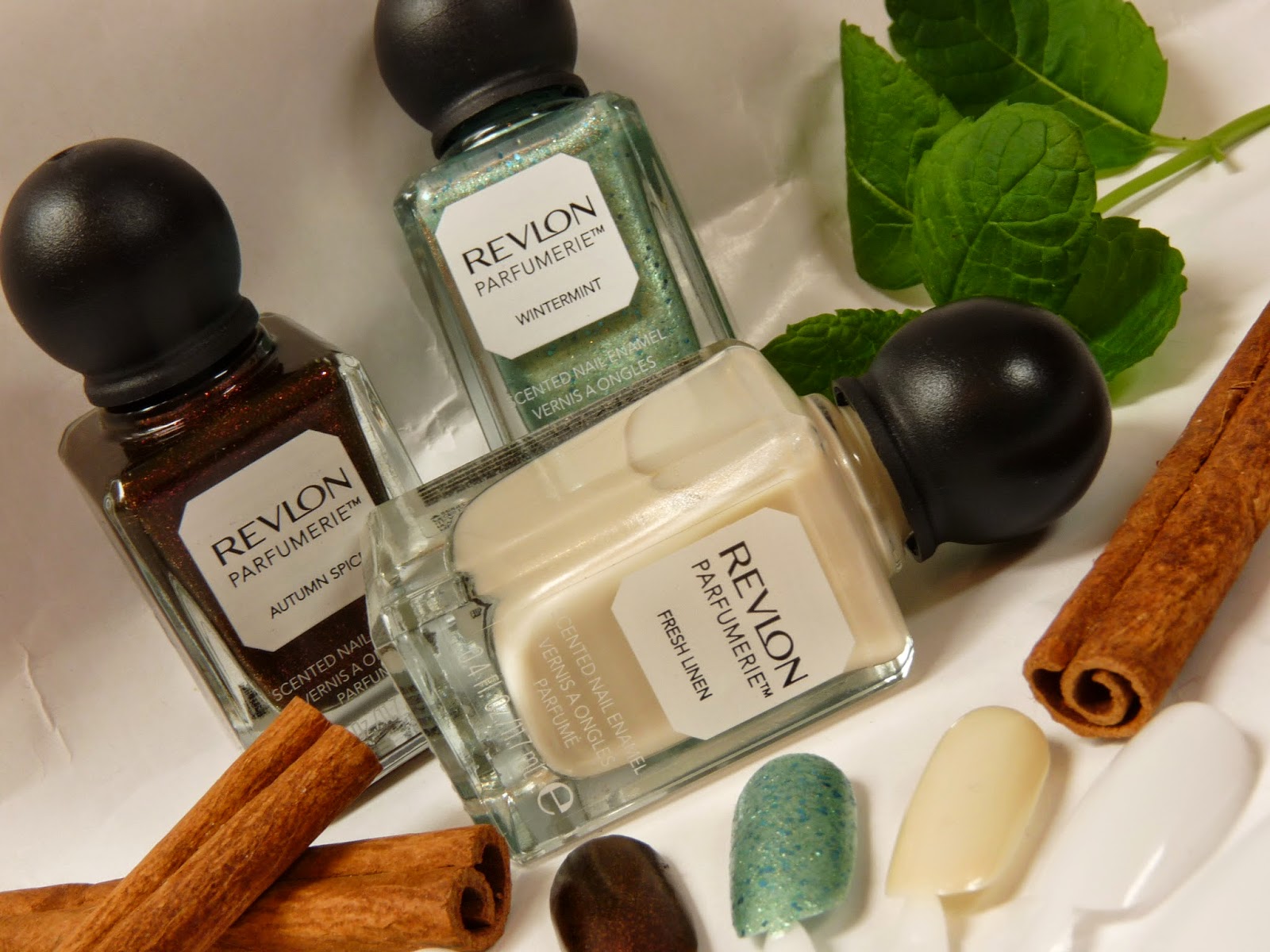 The formula has a nice and easy to work with consistency, and although the brush isn't particularly wide you'll get an even streak free finish with minimum effort, at least with the darker colors although I did have to be a little bit more careful with Fresh Linen, but that's not unusual for lighter shades in general I find. Revlon does recommend that you apply the polish in two coats, and out of the shades that I tried it's really only Autumn Spice that you can get away with wearing only one coat since the pigmentation is that strong, although for maximum impact of both color and scent you definitely need at least two coats with the others. In the photo I've actually used three coat and as you can see the look is lovely and opaque even with the lightest shade, and as the polish is fairly quick drying, I would definitely recommend that you apply more rather than fewer coats. I haven't actually worn these with a top coat, since I wasn't sure what that would do with the scent, but without a top coat and with three coats the colors lasts about 3 days on me before they start to chip, which I think is a pretty average length of wear. The formula contains essential oils that develop throughout the coats and which will come into their own once they have dried, and that scent is quite noticeable for the first day or so and then it gradually fades. 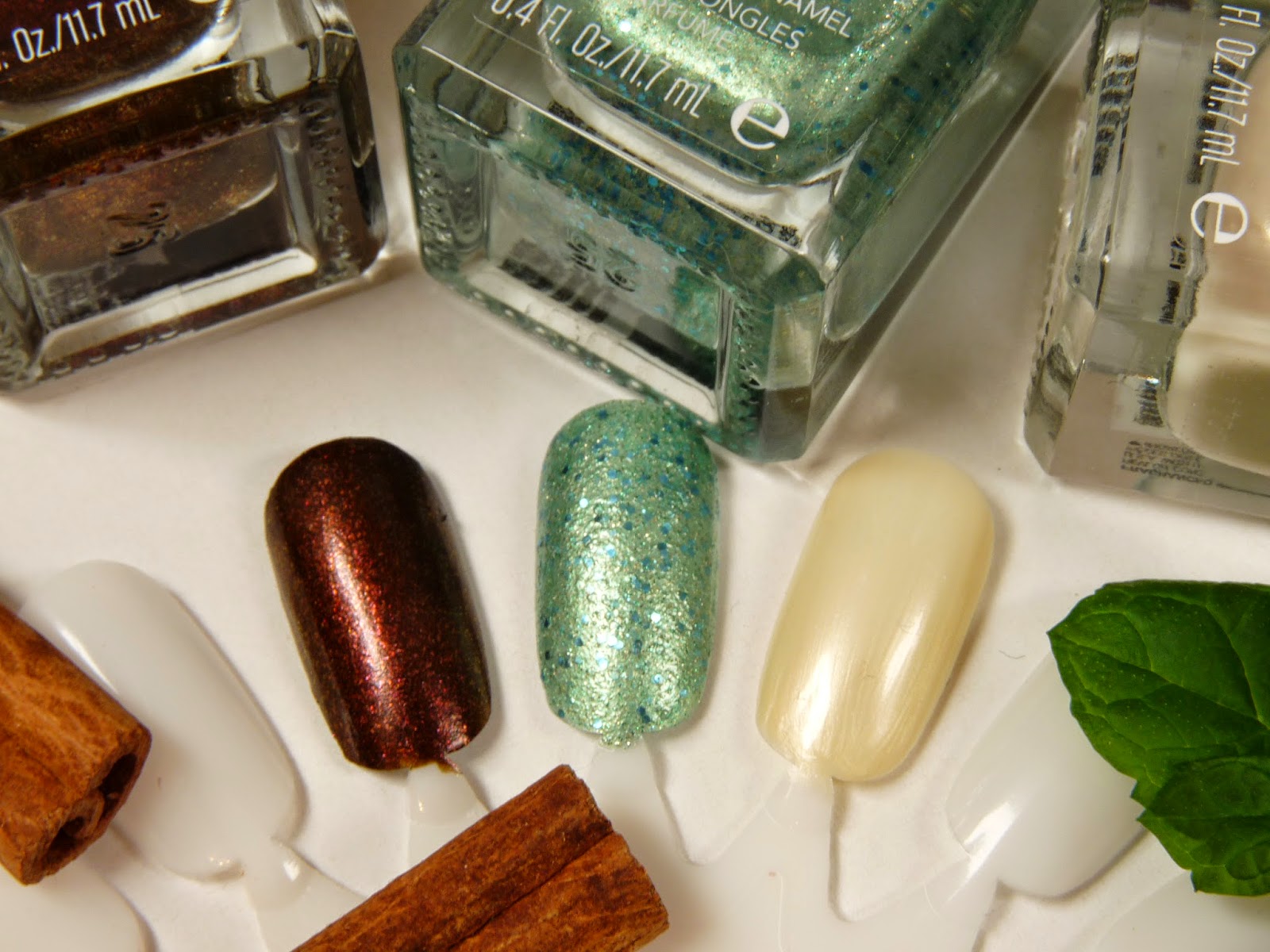 I wouldn't necessarily have bought these three shades if the polish hadn't been scented but I was so intrigued by the whole concept that I wanted to try a little bit of every scent type; Autumn Spice is a sophisticated warm maroon color with a subtle bronze sparkle and with a wonderful and comforting warm cinnamon pumpkin spiced scent. Then we have Wintermint which is a lovely cool pale sea foam green color with light blue glitter which reminds me a lot of Deborah Lippman's Mermaid's Dream. It has an incredible fresh and soft mint scent that smells quite strong, but in a good way. Last but not least we have Fresh Linen which is a nude pale wheat color with a slight pearlescent shimmer and it has a clean, fresh and ever so slightly soapy scent. Out of the shades I tried my favorites is definitely Wintermint, and when I've worn it I feel like a school girl because I can't stop sniffing my nails throughout the day. The Revlon Perfumerie range is a fun concept and I really hope that Revlon plan on introducing more shades and scents, but until then head down to Boots and make use of their 3 for 2 offer, and get yourself some yummy nail polish!
Posted by Unknown at 07:00