A few weeks ago I was in Boots for the sales, not really looking for anything in particular when I passed the Seventeen stand and there was an offer on mascaras - which was perfect since my L'Oréal Butterfly (review here) is about to run out. I've never really tried much from Seventeen in the past, however they've re-branded themselves, vamped up their packaging and released some new products e.g. the lip crayons that have really impressed me. Since I couldn't decide which mascara to get and they had a great offer I ended up getting two, an one of them was the Seventeen Falsifeye Mascara. There are so many mascaras that promise to either lengthen or volumise the lashes, but just to be difficult I want my mascara to do both those things and if it also flares out the lashes - then even better. That's exactly what Falsifeye promised, so I was very excited to see what it was like. The mascara comes in 3 shades - blackest black, black and brown and I went for black, which gives enough contrast for me, although I think that blackest black would be really lovely for a more dramatic evening look. 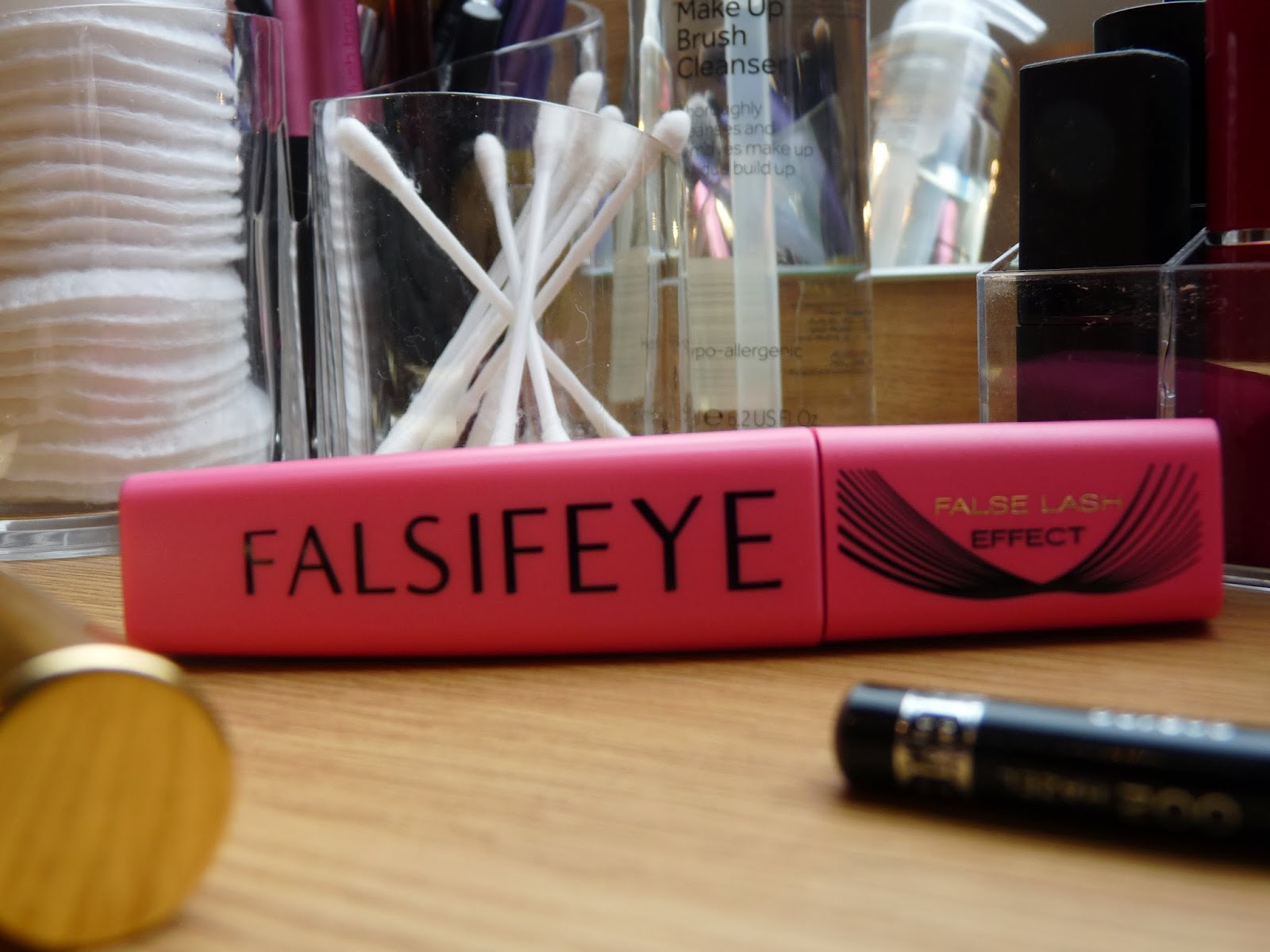 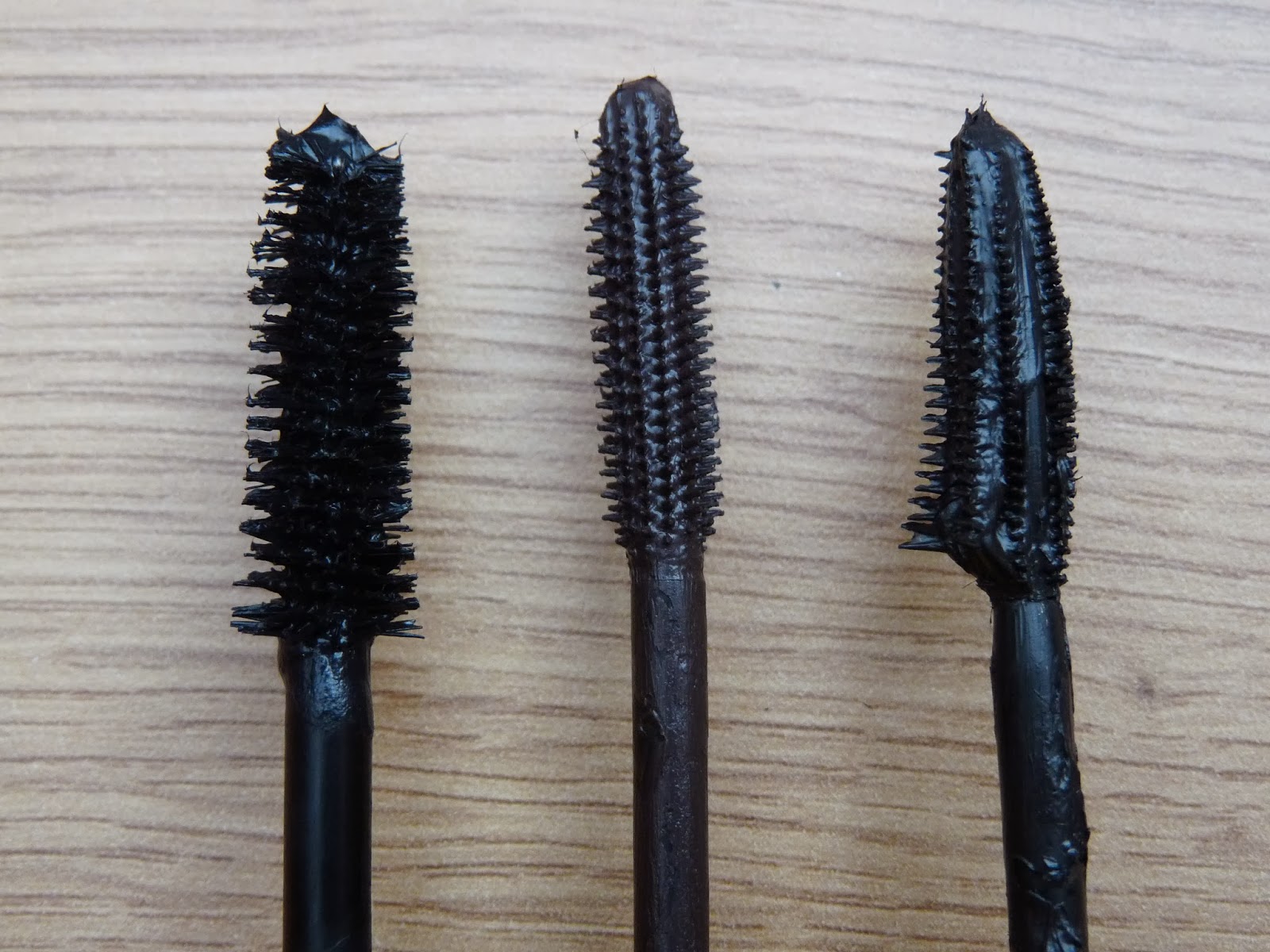 Let's start with the packaging. Packaging definitely isn't everything and although I probably will be drawn in by a sleek, stylish looking product, for me in general it's not nearly as important as e.g. the scent of a product. Having said that though, if there's something about the packaging that effects the practicality or use of it, that will be a minus point in my book and that's exactly the case with this mascara. The packaging is quite chunky and because it's rectangular as well, it takes up a lot of space in your makeup bag or in your makeup storage, and more importantly - and this probably sounds like a silly detail, but the handle of the wand doesn't sit very comfortably in your hand since it's angular and pointy.

Most mascaras don't really come into their own until after you've used them for a good few weeks, but after almost three weeks of use, the formula of Falsifeye is still quite wet and in order to volumise the lashes, you have to work at it for quite a while, but this could also at least be partly because of the brush. The brush is very VERY thick, and personally I think it's too thick. In theory a really thick brush should give great lash coverage, but when it's too thick like this one and the wand is also very stiff, it's difficult to get to all the lashes from the tiniest ones at the inner corner of your eye, to the outer ones. In short the coverage isn't great and when you go back in to cover the inner corner lashes, you have to be very careful not to smudge all over, since the angle is a bit tricky and there is zero flexibility of the wand. With a brush of this width I think it could benefit from having some kind of flex function, to make it easier to work with. On the other hand, it's probably this stiffness that helps to easily extend the lashes and create a wonderful fanning effect that really opens up the eye, and is flattering on everyone.

Even though the mascara isn't water- or smudge proof, it still lasts really well throughout the day and it's very easy to remove without any pulling on the lashes. To sum it up, the mascara does lengthen the lashes and the fanning effect is lovely, however for a volumised effect you really need to put in some effort. Overall it's an OK mascara and it's an ambitious attempt at a product that does it all - lengthen, volumise and fan, but for me it does fall short especially when you look at competing products in the same price range from Maybelline and Max Factor.
Posted by Unknown at 05:30

Email ThisBlogThis!Share to TwitterShare to FacebookShare to Pinterest
Labels: 17, Mascara