T''is the season to do pastels - la la la la laaa, la la la laaa... Every self respecting brand seems to have launched at few pastel colored polishes this spring and summer, and despite having a good few mint greens, baby blues, and lilacs already in my polish collection I so WANT to get a few news ones. But somehow  there is clearly a reasonable bone in my body because I have managed to resist the majority of the new releases and there are also other ways of doing pastels than just wearing gorgeous ice cream colored soft shades. One of the more fun pastel effects this seasons is the Speckled Egg effect from Models Own (guess what I'll be sporting this Easter...) which makes me think back to what is for me "the original" speckled effect polish released in 2012 - Nails Inc's Pudding Lane (£5), which was one out of four deliciously pretty speckled glitter polishes in different pastel shades; pink, grey, cream and blue. 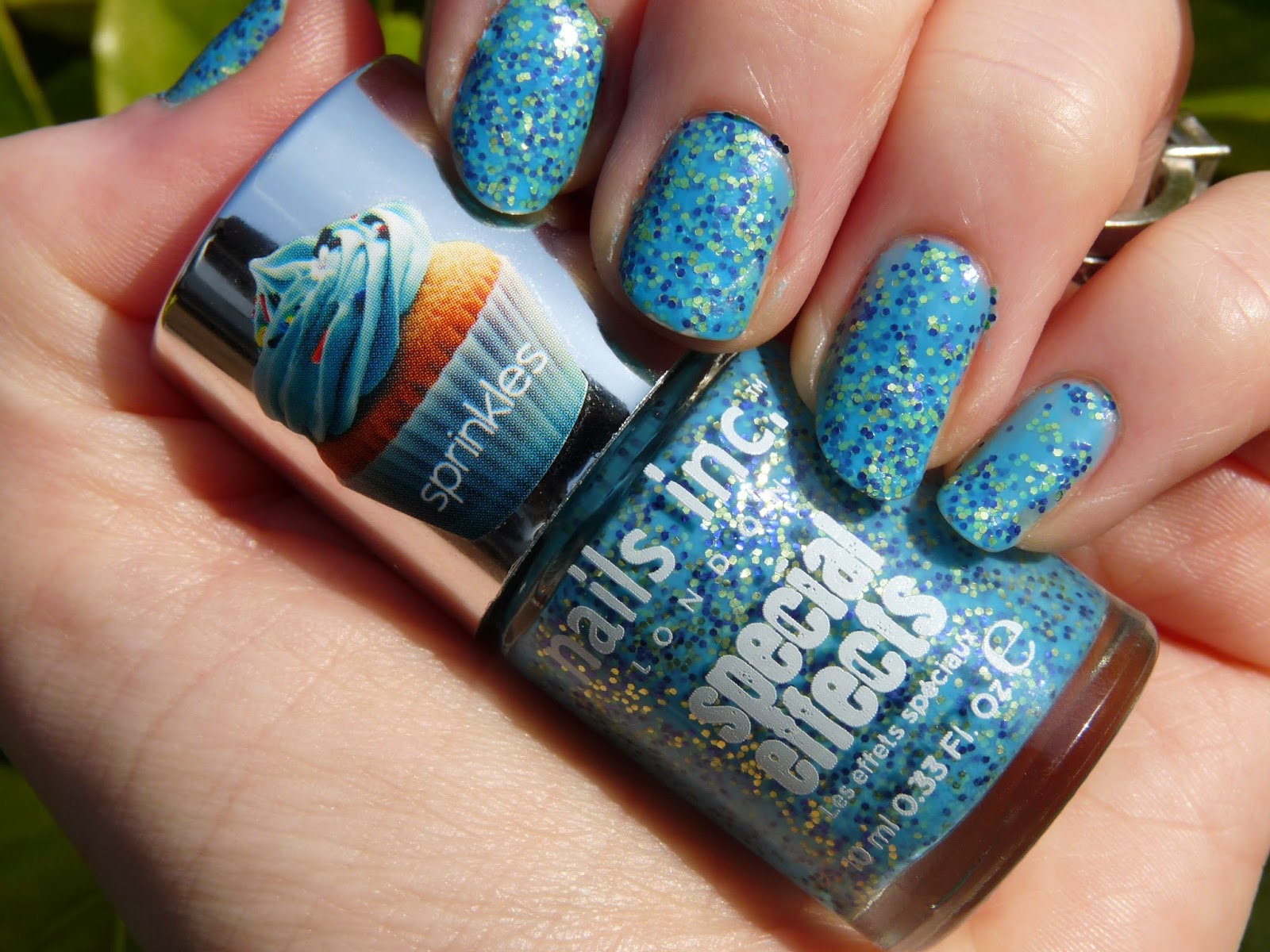 The base color of Pudding Lane is a beautiful light Maya blue and the formula is very dense with glitter particles that come in dark as well as medium blue, bright lime green and silver. Since the particles are heavy in comparison with the formula, it's important that you shake the bottle before you apply it to make sure the pretty particles don't sit at the bottom and you hardly get any on the brush. The formula is the usual nice consistency like all Nails Inc polishes, and although the brush is of fairly average width you get a good amount of product and glitter as well on it, so you don't have to be careful when you place the glitter on the nail, you'll still get a fairly even distribution of it. The pigmentation of the Maya blue base is great and although I always recommend using two coats, you'll get a nice build up for a beautiful opaque finish and just enough glitter to get the right candy like sprinkle effect. I would also highly recommend that you apply a high shine top coat, for the sprinkles to glitter as much as possible.

On my nails this polish lasts about 3-4 days before it starts to chip and before you think - "pretty but tricky to remove", let me set your mind at ease since the sprinkles are so tiny and fine that they don't stick to the nail the same way as a lot of the coarser glitters, making it much easier to remove the polish than you might think, even with acetone free polish removers. I love the beautiful contrasts between the base shade and the sprinkles and I think this is a great, fun and whimsical way to do pastels this season but in a way that isn't plain or predictable, but shows personality and cheekiness. The only bad thing about this pretty polish, is that it always puts me in the mood for cupcakes or Krispy Kreme doughnuts - extra sprinkles anyone...? Let me know which color of polish or even specific polish you would like me to review in our next Manic.Monday, and don't forget - only 4 days left to Friday!
Posted by Unknown at 07:00